Nancy Mertzlufft organized this project. That’s Nancy on the left and Robert Ferre on the right. She raised the funds, went to the hospital and asked for the land, and made it happen. It was a real journey of the heart for her. She accepted donations for the labyrinth over a period of three years, one heart at a time. There is a secret time capsule hidden beneath the center of the labyrinth which contains the names of each of the donors. So you might say that the hearts and good wishes of a great many people around Columbia are invested at the heart of this labyrinth. The hospital was kind enough to donate the land, the concrete and landscaping for the labyrinth. Hurray, Nancy! Thank you for your focus and perseverence to fund Robert and I to come and decorate the concrete with your permanent Veriditas variation of the Chartres style labyrinth.

The setting is on a hill facing south. This is the view to the west of a man (Robert Ferre) outstanding in his field.

The labyrinth is located at the corner of Walnut and Willams. You can see Boone Medical Center in the background of the preceding image, that makes it just east of The Center. The location is excellent for a labyrinth. A little far from the actual hospital (5 minute’s walk), but good because to get there from the hospital, you have to leave the environment you’re in. That is, if you are stressed for some reason in the hospital, you have to take a walk to get away from that stress just to get to the labyrinth. Once at the labyrinth you may walk deeper and deeper into your situation to find clarity. It will be a great asset to physicians, staff, patients, and family who visit the hospital.

We’re just south of Stephen’s College. What a great tool for the students! They’ll be able to come, walk and get centered for their exams and presentations. Maybe some of them will join the Labyrinth Society’s 365 Club.

Robert continues to refine our layout procedure. You can see how we’ve defined the orientation with dark tape for each of the labrys’ along with the precise locations of the straight paths. We invested a lot of time here. Then it rained monday afternoon and our tape floated away! We laid out the locations again monday evening, and it rained hard on tuesday. We came back on Wednesday and the slab was mostly dry, but we had to determine all the locations again.

We still had some markings left, but most of them floated off of the concrete. So we did it again. It took 3 iterations to get the paths measured since it rained hard twice after our first layout!

We’re working really fast now. From sunup to sundown with a nap break in the middle. The color coat that we are using is cement based. It sets up really fast in the wind and warmth that we’re experiencing here. So it’s been a bit of a struggle to get enough hours of daylight to get the job done. We’re barely on schedule. We’ve found that we can keep our buckets of color in an ice bath to keep them cool and prevent the premature setup we’ve been experiencing.

We’ll paint one more batch of color tonight and come back to finish Tuesday. We mix small batches of our pigment and paint them onto the concrete. Nobody else that we know of does this. Another labyrinth company that works on concrete only stains their patterns. We feel that actually adding another layer of colored cement to the pad not only creates a spectacular ‘inlayed’ effect, but will last longer.

There is a good aerial photo of this labyrinth on Google Maps.

I’m always happy to answer any questions. Please use this form: 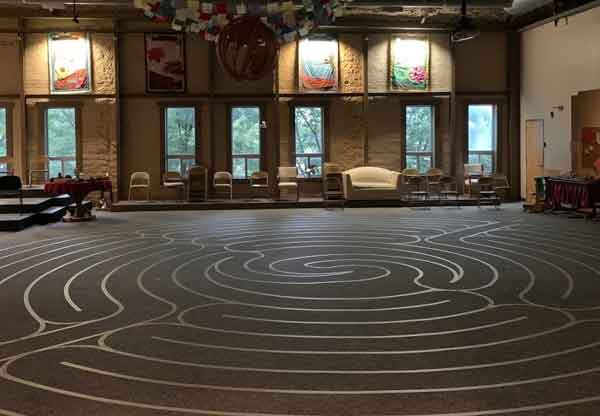 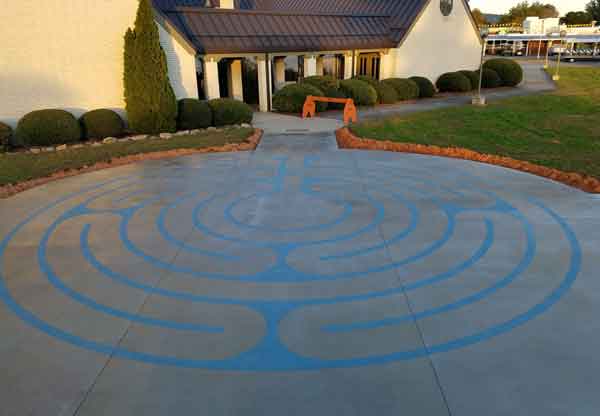 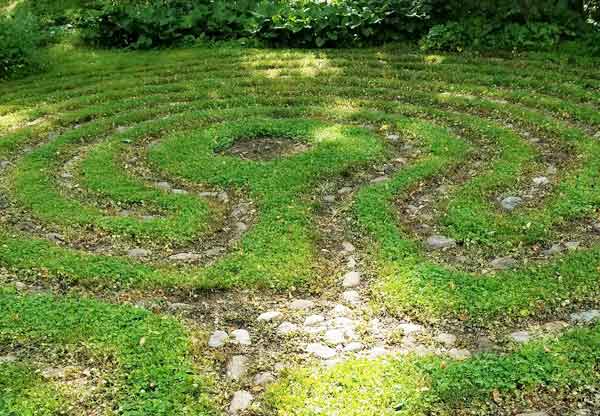